Plantar orthotics are used to enable subjects to maintain the best possible balance in static and dynamic situations. They have a major influence on the movement of the rear foot (pronationand supination) during running and walking.

Running is fundamental to all sports in physical preparation, and the runner population, in general very heterogeneous, will consult a podiatrist. Plantar orthotics have been shown to be extremely effective in lesions caused by running (Eggold, 1981; Kilmartin and Wallace, 1994). Furthermore, the wearing of orthotics is thought to increase shock absorption during initial contact (Redmond et al., 2000). The reasons for this population consulting a podiatrist can be categorised into two types: a desire for more comfort, particularly “cushioning”; and pathologies connected with the practice and/or age of the subjects. Two pathologies appear to account for the majority of consultation requests: gonalgia and calcaneal tendinopathies. It is in this context that we chose to evaluate the impact in terms of satisfaction, pain, perspiration and perception of stability of two types of thermoformed plantar orthotics. This technique is widely recognised in sports podology (Boissinot, 2007) and has a number of advantages: better stabilisation of the rear foot (Rodgers, 1999), better load distribution (Berger et al., 2005) and easier adaptation in athletes (Mündermann et al., 2003) have been demonstrated and are evidence of the positive influence of moulded orthotics on the running pattern. Moulded orthotics reduce the maximum overpronation of the rear foot and the maximum external rotation of the tibia. 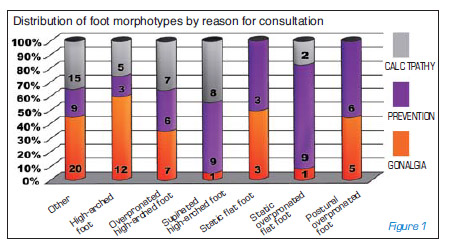 The method chosen to make the orthotics was thermopressure in the corrected position by thermoshaping. To make the orthotics, in the first instance we had to make an accurate mould of the foot using a vacuum bag. The orthotics were made malleable by heating them and then positioned underneath the subject’s feet in order to assume the foot shape. Using the windlass technique when moulding the thermoformed orthotics ensured that the rear foot and midfoot were naturally realigned (Aquino, 2003 – Photo 1 + Figure 4). 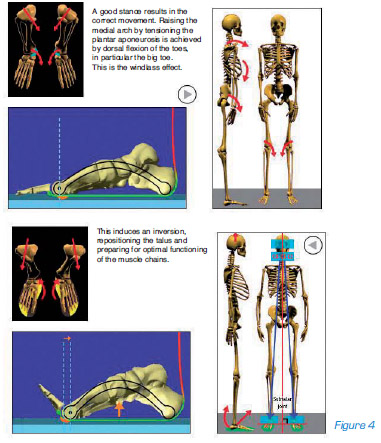 The thermoformed orthotics were made to measure based on two

criteria: the patient’s pathology plus a pogological examination comprising several stages – questioning, palpation, static podoscopic examination, dynamic examination (podometric and digital) – and an analysis of the wear and deformation of the patient’s sports shoes. Based on a summary of these findings, the practitioner was able to make an effective and suitable tailor-made plantar orthotic. The plantar orthotics chosen were of two types: the SPCT® Sport standard 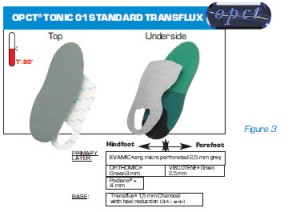 Each patient was asked to fill in a questionnaire after one month to record their opinion regarding comfort, perspiration, weight of the orthotics and perception of foot stability. Pain was evaluated by the question “Has wearing your orthotics had a positive influence?”. The choice of responses was yes or no.

The vast majority of patients were satisfied or very satisfied in terms of comfort (90%), perspiration (93%), weight of the orthotics (95%) and foot stability (95%). In 76% of cases the orthotics appeared to have a positive influence on pain. (Figure 5) 27% of the orthotics were renewed after one year. But this depended essentially on the intensity of practice.

Wearing the orthotics appears to bring real comfort to the patients. There is a close connection between sports footwear and plantar orthotics in the practice of sports. The footwear has to adapt as well as possible and in a neutral way to the movements involved in the sport, but the thermoformed plantar orthotic fulfils a compensating role in connection with pathologies. The addition of a plantar orthotic does not appear to result in unacceptable excess weight or excessive perspiration. This survey confirms the results of previous studies: foot orthotics are shown to be effective in reducing pain, particularly in the knee (Eng and Pierrynowski, 1993; Springett et al., 2007). Patient satisfaction in terms of perception of foot stability may be partly explained by better plantar pressure distribution (Berger et al, 2005). CJ and BL

Aquino A, Payne C. Function of the Windlass Mechanism in Excessively Pronated

Eng JE, Pierrynowski MR. Evaluation of soft orthotics in the treatment of patellofemoral

Kilmartin TE, Wallace A. The scientific basis for the use of biomechanical foot

orthoses in the treatment of lower limb Sports injuries: a review of the literature.

extremity kinematics and kinetics during running.